In 1973, director Herb E. Smith produced a short film in southeastern Kentucky. Entitled In the Good Old Fashioned Way, his work explored the spirit of the Old Regular Baptists—a small religious denomination based almost exclusively in rural Appalachia. From their riverside baptisms to their traditional line-singing, the “Ole Regulars” were largely unknown to much of the rest of the world prior to Smith’s film. But not to me. To me, the Old Regular Baptist Church in a little concrete meetinghouse on the side of the road had been the place of worship for much of my family. Few things fascinated me more than the past as a child, but the history that In the Good Old Fashioned Way captured wasn’t just an abstraction of a faraway place—it was a real and present part of my own history.

This commitment to community histories led me back to my home state this past summer. Looking to both reconnect with those histories and to build my professional skills, I accepted an internship at Appalshop Archive in Whitesburg, Kentucky. Founded in 1969 during the War on Poverty as the Appalachian Film Workshop, Appalshop today serves Central Appalachia as a regional arts and media center. Its archive unit is responsible for preserving the films and other media produced by Appalshop since its inception (including In the Good Old Fashioned Way, directed by Appalshop’s co-founder).

Interning with Appalshop Archive gave me the chance to expand my archival training and use it to help preserve local historical records. While I did in fact find myself annotating and cataloging unused oral histories originally recorded for Herb E. Smith’s 1973 film, I also found new connections to my region’s past. 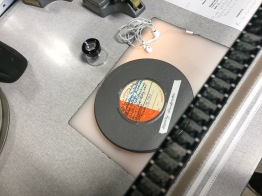 With the guidance of moving image archivist Caroline Rubens, I learned basic film handling. Inspecting 16mm film reels from the 1950s to 1980s, I wrote physical condition reports on home movies documenting daily life in some of the places I’d known growing up and then rehoused the historic reels into new archive-safe, acid- free containers.

Many of the historical materials that came across my desk weren’t directly related to Appalshop though. 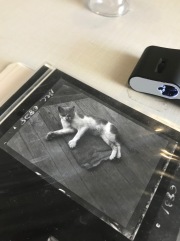 Operating in a rural area where there’s a relative lack of professionally trained archivists, Appalshop Archive also accepts and preserves films, documents, and artifacts from the surrounding communities. One of the most impressive examples of this is the William R. “Pictureman” Mullins Collection, for which I scanned photographic negatives. Mullins, an early twentieth century commercial photographer, snapped more than 3,000 photos documenting life in rural southeastern Kentucky and southwest Virginia. From local baptisms and funerals, to African American family portraits and farm animals, this collection is a window into peoples and places in Appalachia that are often underrepresented in traditional archives or histories.\

At other points in the summer, I processed historical collections of paper materials like Mountain Review magazine, cataloged and created metadata for midcentury Kentucky photographs, and annotated and made accessible online oral histories from some of Appalachia’s first African American women coalminers.

Another highlight from my time at Appalshop Archive was using nineteenth century court records and twentieth century oral history interviews to co-curate and help install a small exhibit on an Appalshop play/film entitled “Red Fox/Second Hangin’”.

While I have been working in archives and museums since 2015, interning with Appalshop Archive proved a unique experience. It exposed me, for the first time, to the processes used to preserve historic films and other audiovisual materials. But more than that, it offered an opportunity to use my professional background to reconnect with and share the histories of my home communities. That, ultimately, is the purpose of professionally preserving items of the past: to ensure they are accessible to people who can connect with or learn from them.

Public History at UIUC is the website and blog for faculty-student Research Cluster sponsored by the Illinois Program for Research in the Humanities. Our goal is to explore, document, and promote hidden and forgotten stories and persons connected to our campus and the wider Champaign-Urbana community.